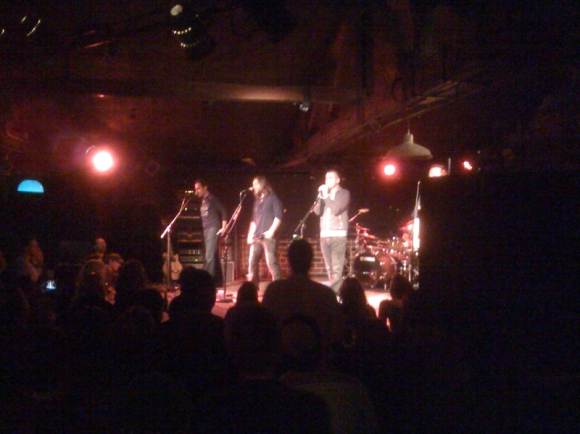 Meant to post about the Great Big Sea concert a week ago but er, life. To sum up: awesome. The boys were well-rested and were just starting to tour again. The music was excellent but the balance was bad at certain points. Sean was drowned out a few times. From our vantage point, Bob was blocked by a tower of speakers but we could see him about half of the time. Nonetheless, they played a good mix of old and new music. A few of the new songs I appreciated more live. For instance “Oh Yeah” (off their new album Fortune’s Favour) didn’t thrill me at first listen but it was better live (and looks like it’d be fun to play). The photo is courtesy of Tim because my phone took terrible pictures.

I would be completely remiss if I didn’t laud Scythian too. These D.C. lads are a blast. Here’s a terrible-quality photo. I hope to see more of them in the future (they’re playing the Troc in Philly on St Patrick’s Day for those following along at home). They’ll also be at the Dublin Irish Festival this year (not sure we’ll be making this).